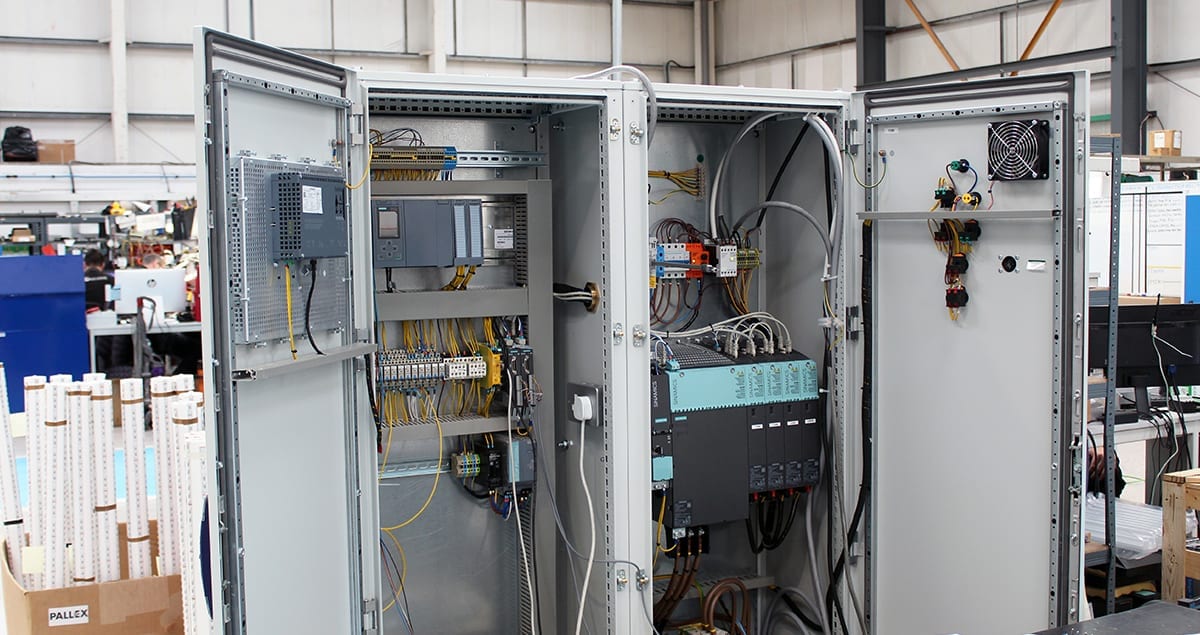 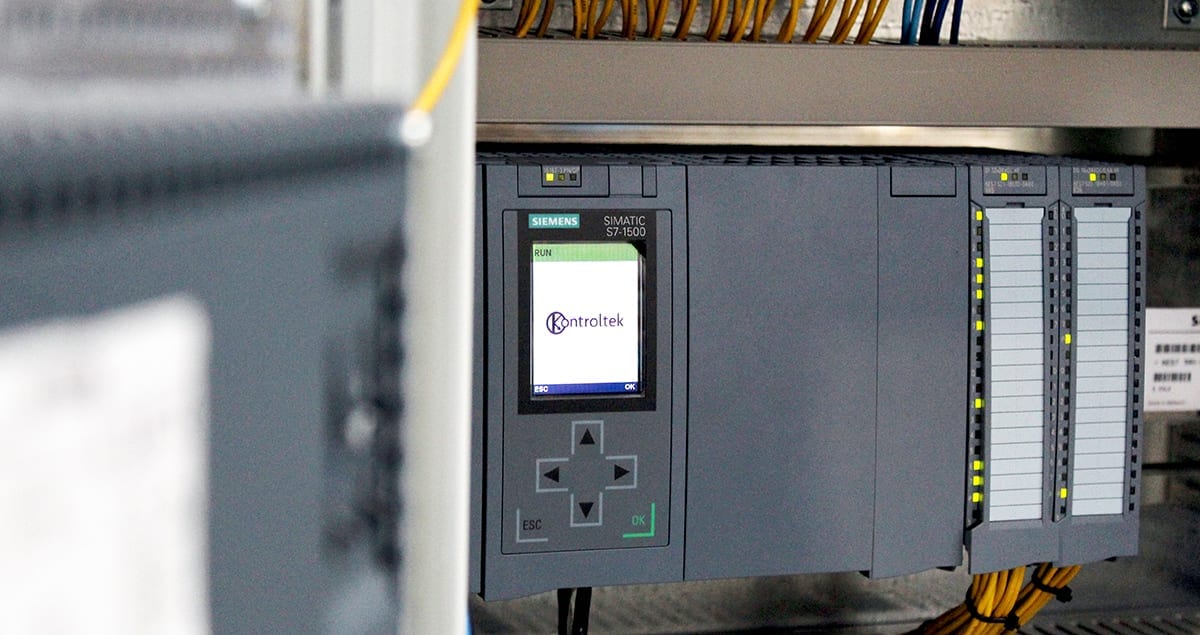 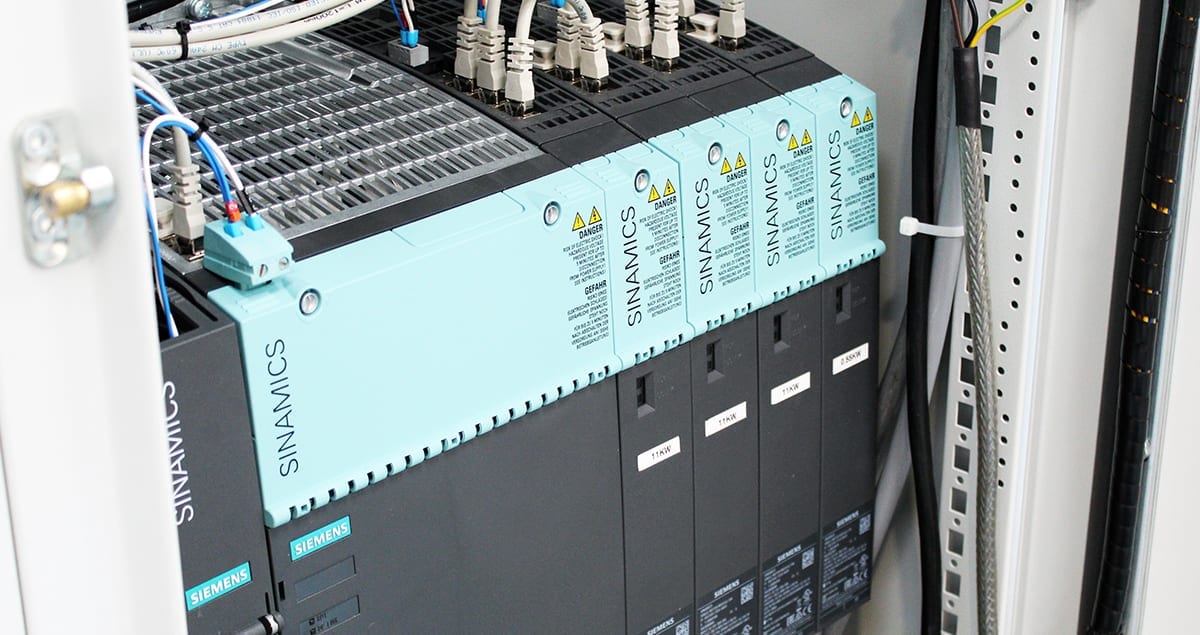 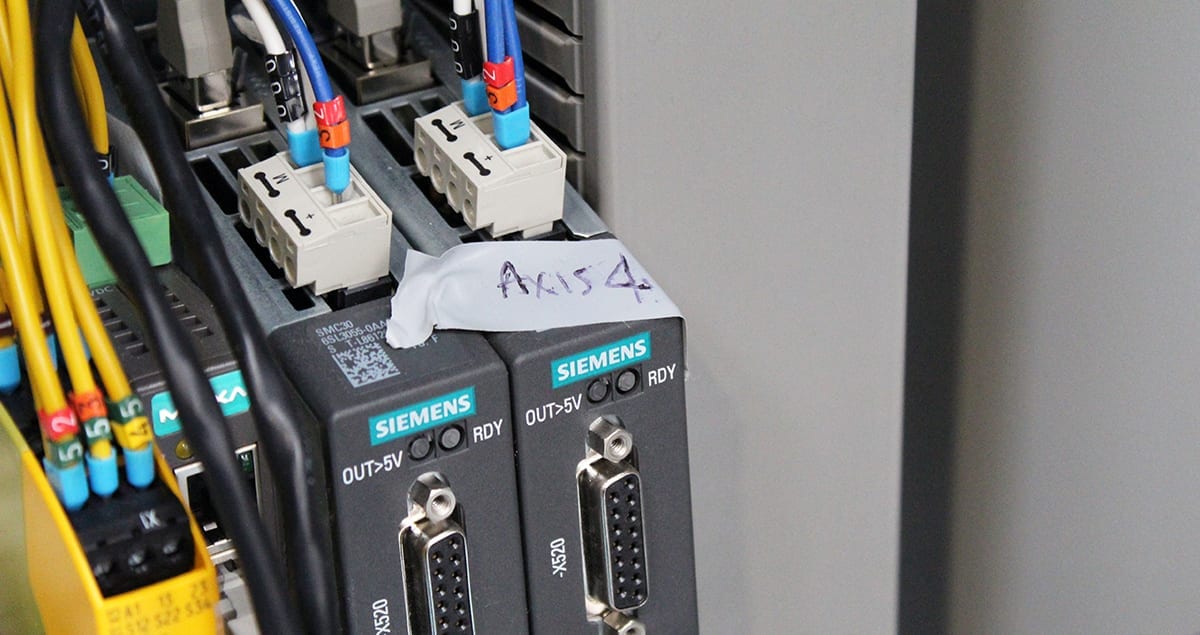 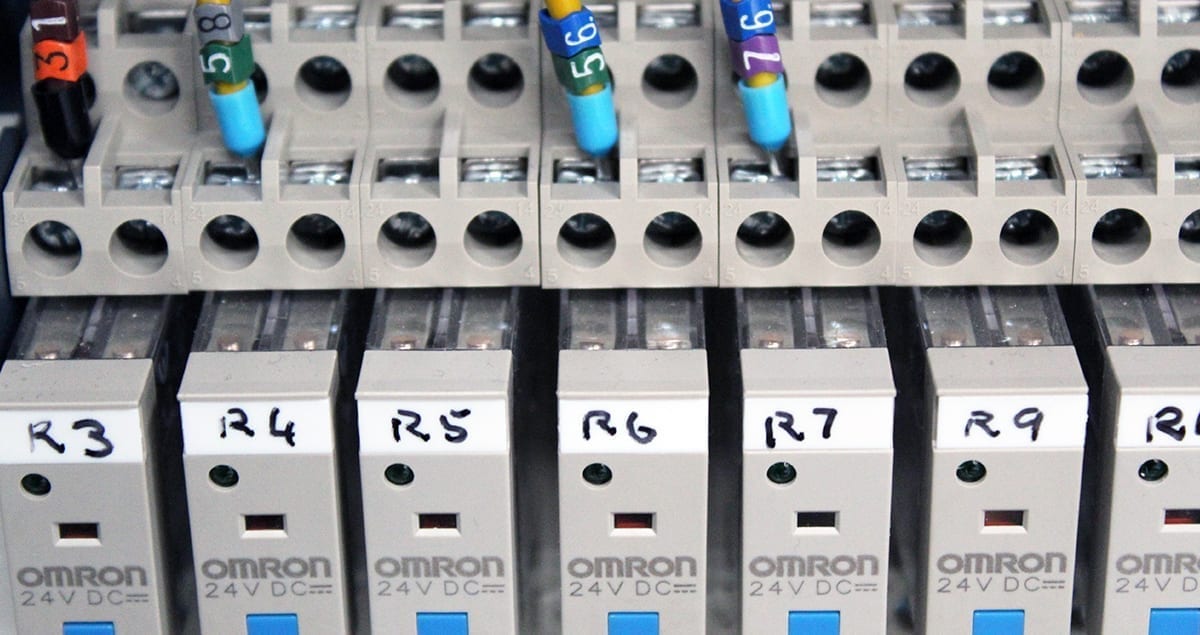 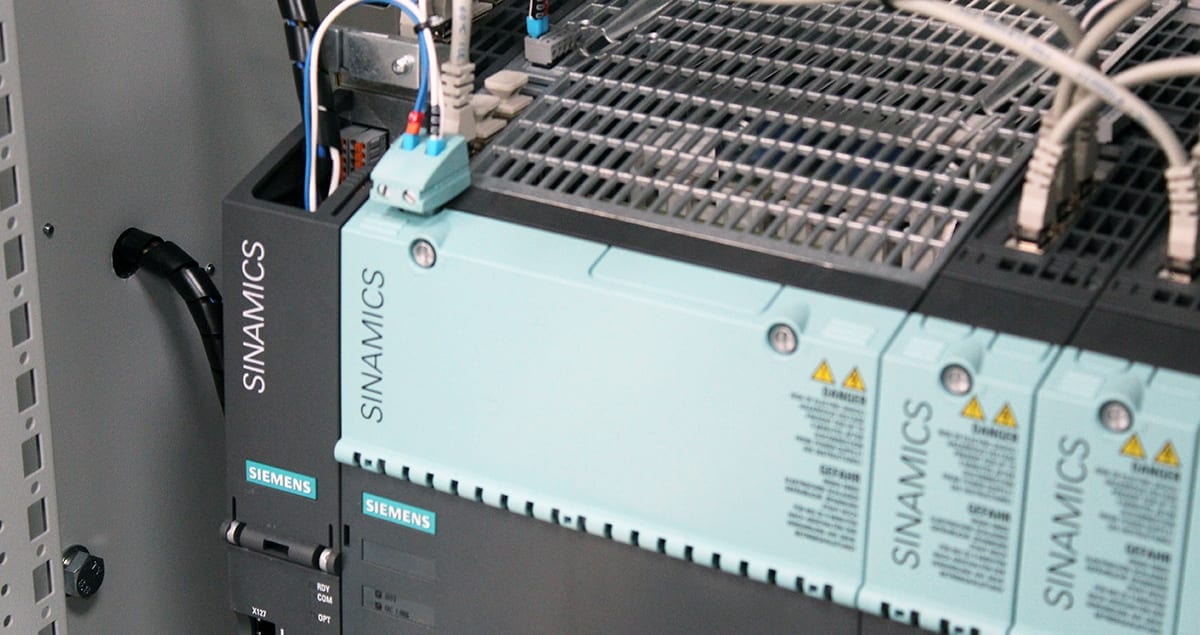 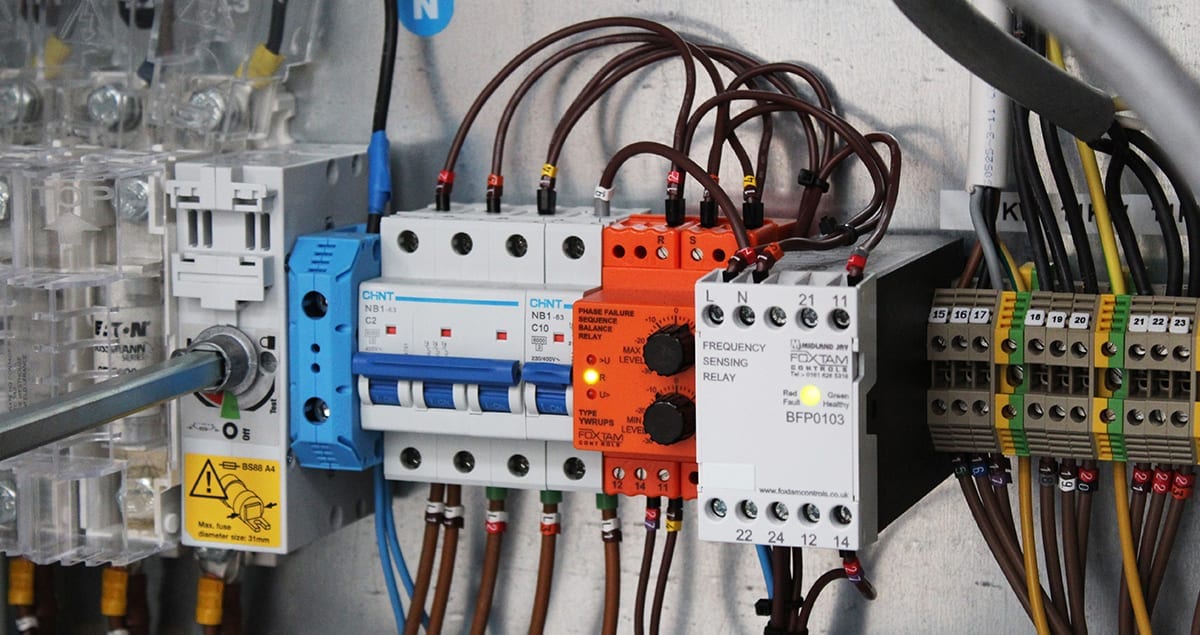 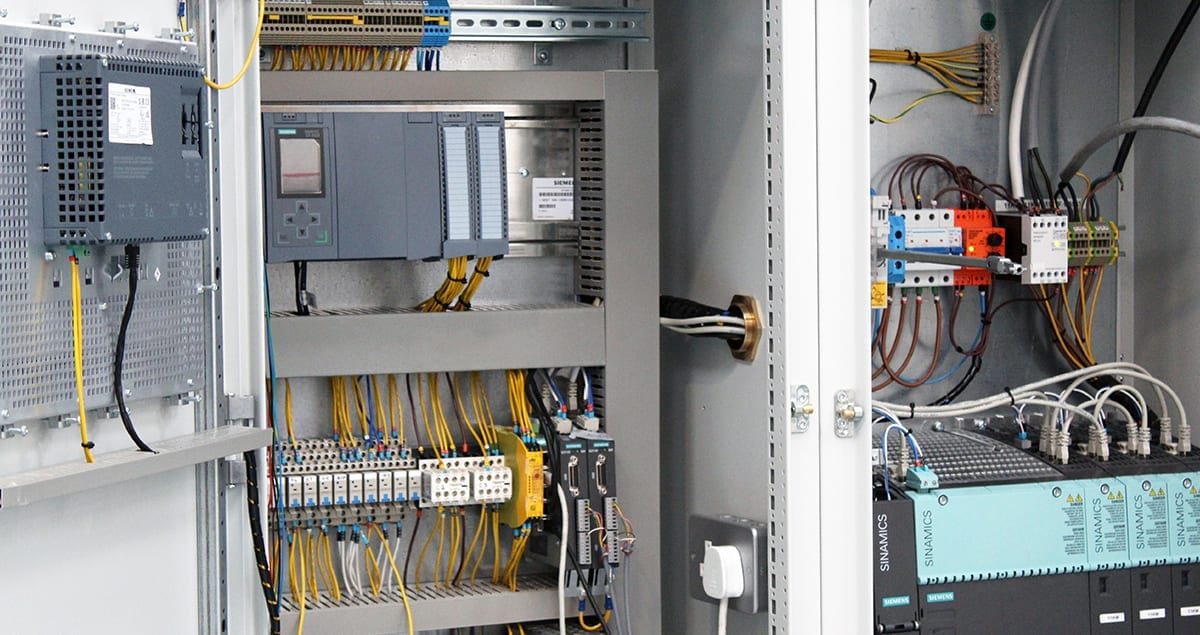 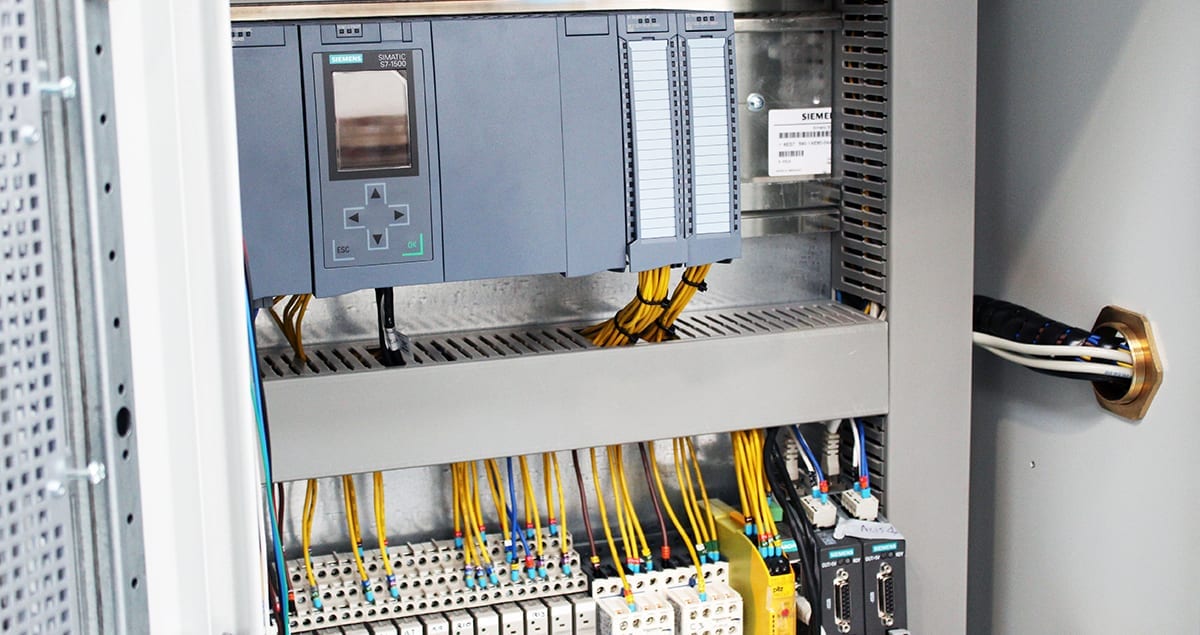 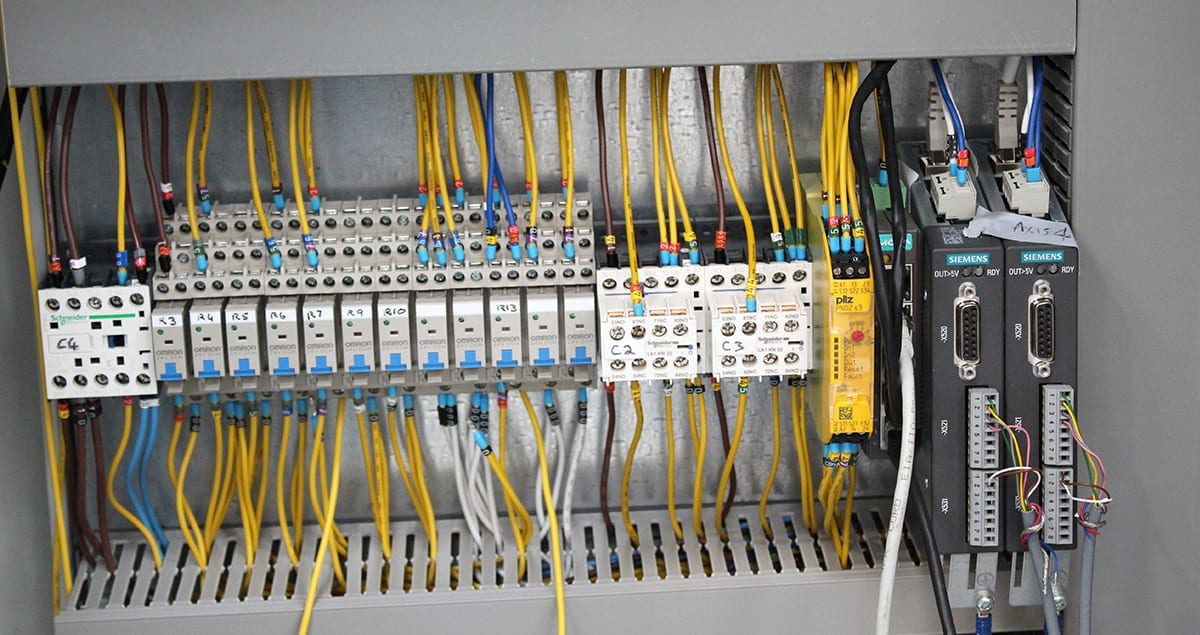 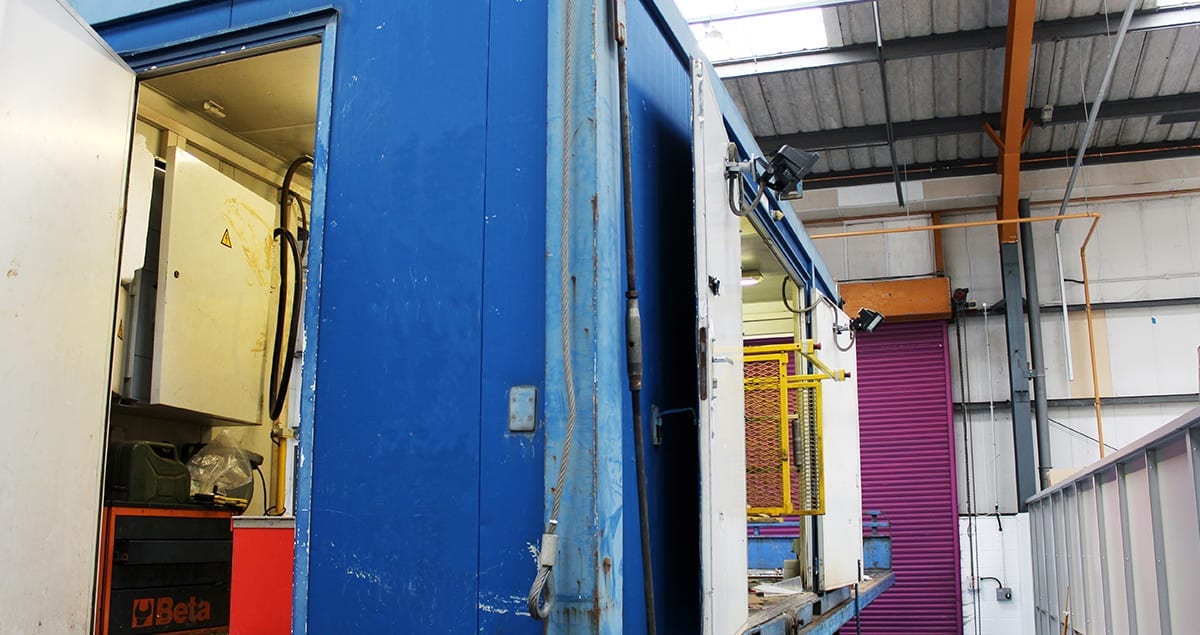 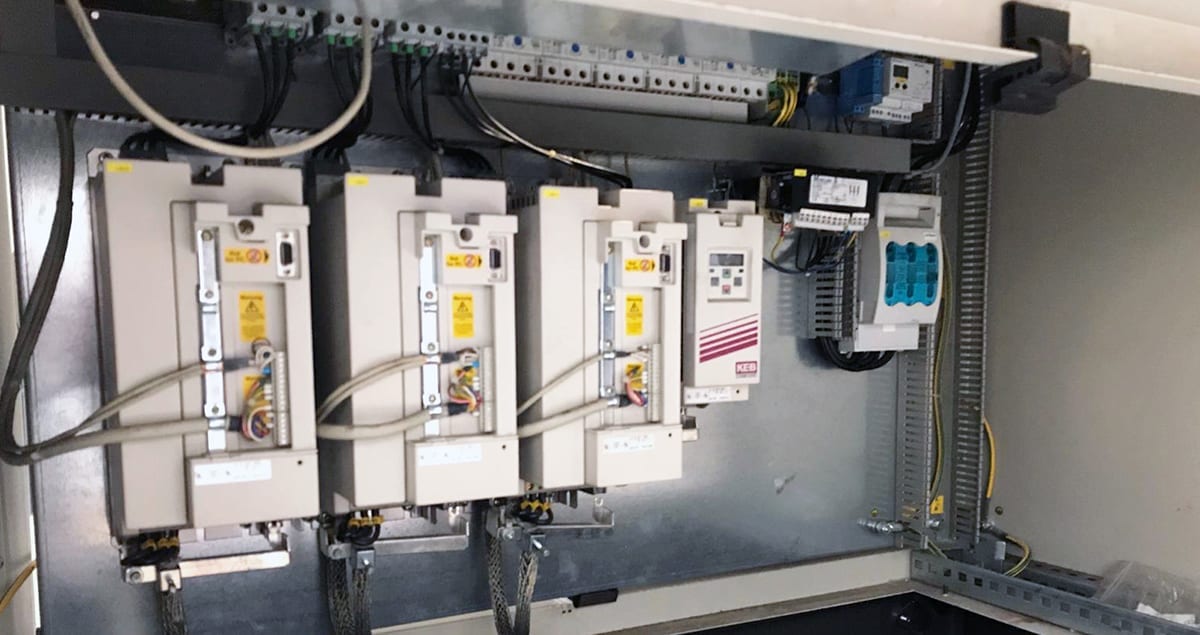 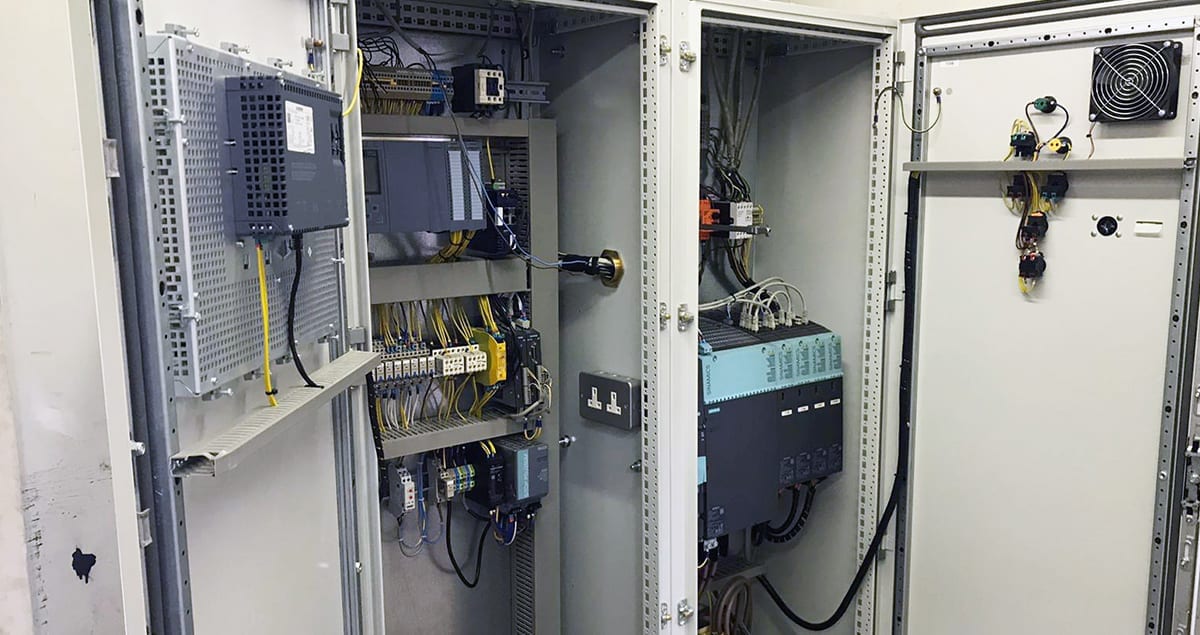 Dan Williams, an on-site engineer, undertook the project for the UK metal roof and wall manufacturer.

After years of working closely together, Kontroltek made the recommendation to the manufacturer that they should upgrade the group’s metal sheet curver. They agreed. 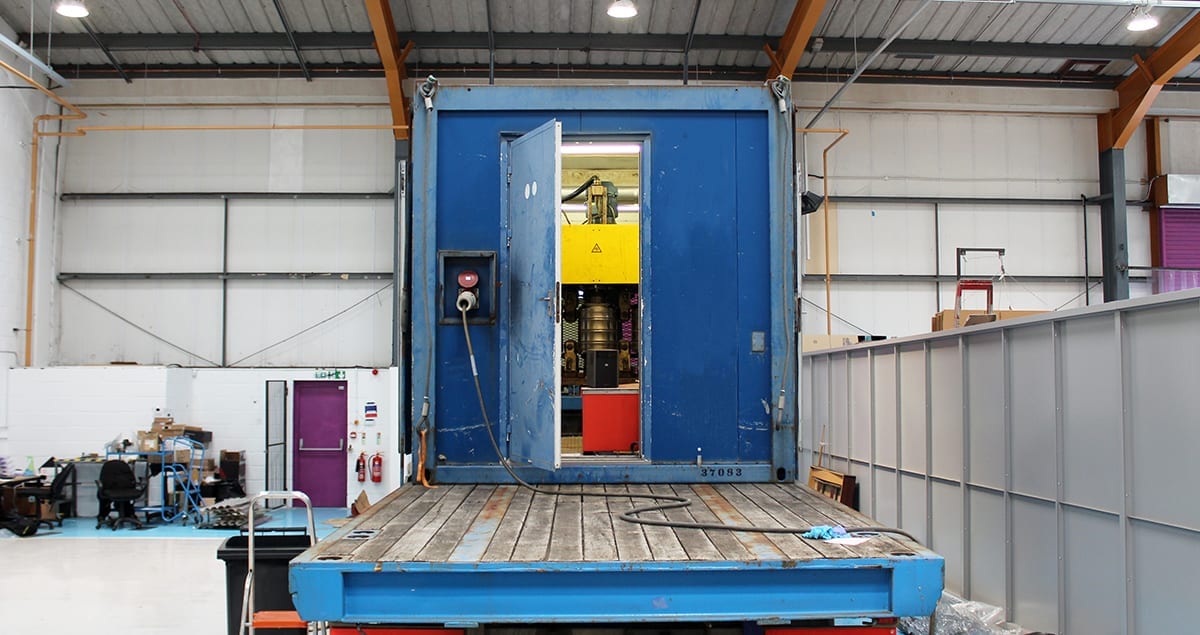 The manufacturer delivered the roof profile machine to the Kontroltek workshop on a flatbed. We handled the rest.

Founded in the 1980s, the manufacturer is a UK-based leading supplier of roof and wall profiles for commercial buildings across Europe. They have helped produce technically challenging and stunning designs.

They use several machines to deliver its roof and wall products. In this particular case, we helped upgrade one of the group’s roof profile machines.

The metal sheet curver has sheets of metal fed through it and then the system curves it into the required shape for the building’s requirements. Usually, the machine is lifted by crane and the metal is fed through on-site to roofers waiting on the building. 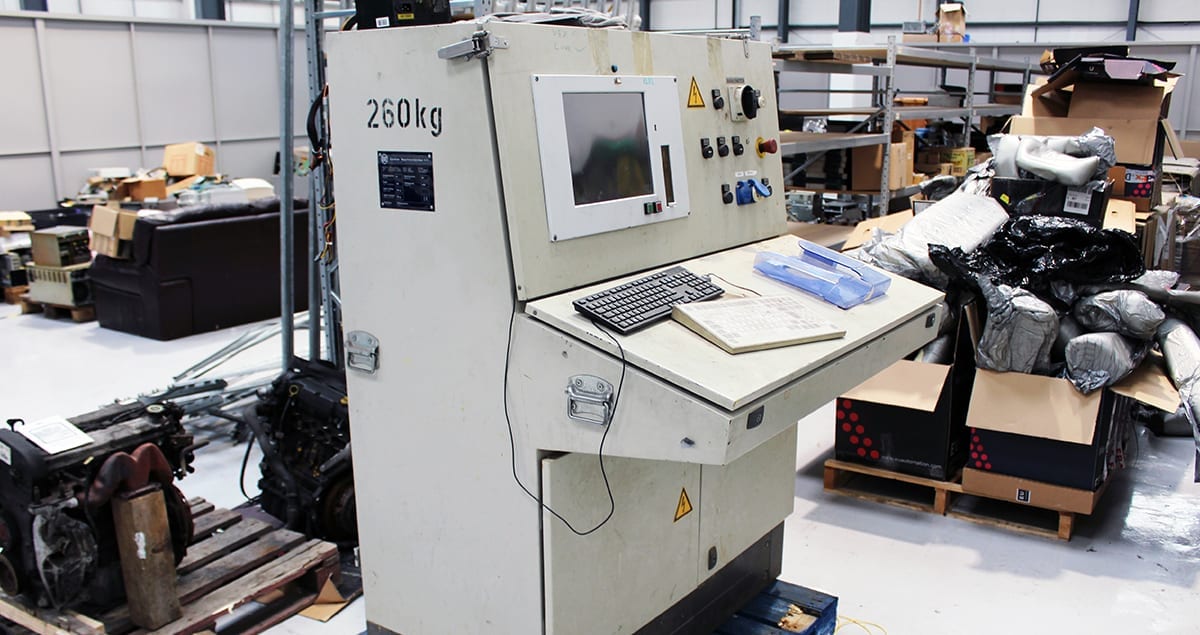 The old, outdated control unit. Still running Windows 95, this machine could no longer handle the strain of operating the metal sheet curver.

Unfortunately, the metal sheet curver was suffering a lot of issues. This was natural due to its old age. The machine was built in 2002. As the machine was constantly breaking down, Kontroltek engineers eventually made the recommendation of upgrading its components and system.

The machine was being run on a Windows 95 system, with four old inverters and a poor-quality encoder. In the old cabinet, the Windows 95 PC operators would be used to complete several tasks — inputting data and setting up jobs. If an issue occurred, it only displayed “FAULT”, leaving the operator to guess what had gone wrong.

The customer was having to keep spare parts for every component, which wasn’t economical. Especially as the machine travels around Europe to complete jobs.

The group often had to book engineers out on-site, even if this meant flying, to find the fault and repair it. Even Dan has travelled from the Kontroltek workshop in South Wales to Scotland to do this. 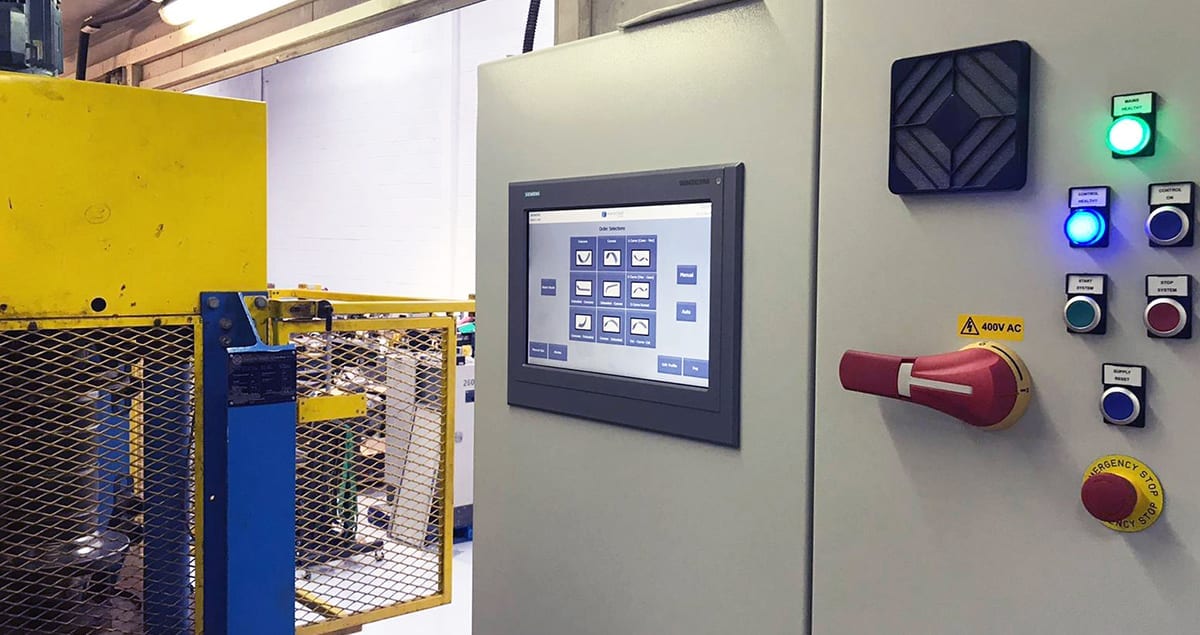 The brand new bespoke control unit was fitted to the machine by Dan Williams, our on-site engineer.

Luckily, the manufacturer was able to continue to use the machine with the older system. Dan and other Kontroltek engineers were able to build the new system in the workshop. Then over an agreed two-week period, the old system was removed and the new system installed.

The new cabinet consisted of a complete Siemens SINAMICS system — run by a Siemens 1500 PLC. As well as this, all of the wirings were changed in the curver and a new encoder was installed.

The previous encoder counted 1,024 counts per revolution; the new encoder counts 2,048. By doubling the precision, the accuracy of roofing profiles is vastly improved.

Possibly the biggest advantage of upgrading from the old inverters to the new SINAMICS system is the accurate display of any faults. The new system would inform the operators if there was an under-voltage, overvoltage, encoder issues, motor windings out of position and more if a fault occurs.

Faster and easier diagnostics. Less downtime and costs for the customer.

The whole cabinet and its components inside are weatherproof. There’s also a heating and cooling system inside the cabinet, so all components are kept at the correct temperature.

Dan also wrote a new programme to replace the software it was running on. He wrote it in Ladder and Statement List, providing each curve profile with a function block. This keeps everything separate, meaning the operator can just input the data and the job is done.

Engineers can even now design new roof profiles in the system. This would have been impossible before with the old system.

The Kontroltek team also installed a new 4G hub, so instead of flying out engineers on-site every time, an engineer can dial in remotely and resolve any software issues. Good for the planet; cost-effective for the customer. 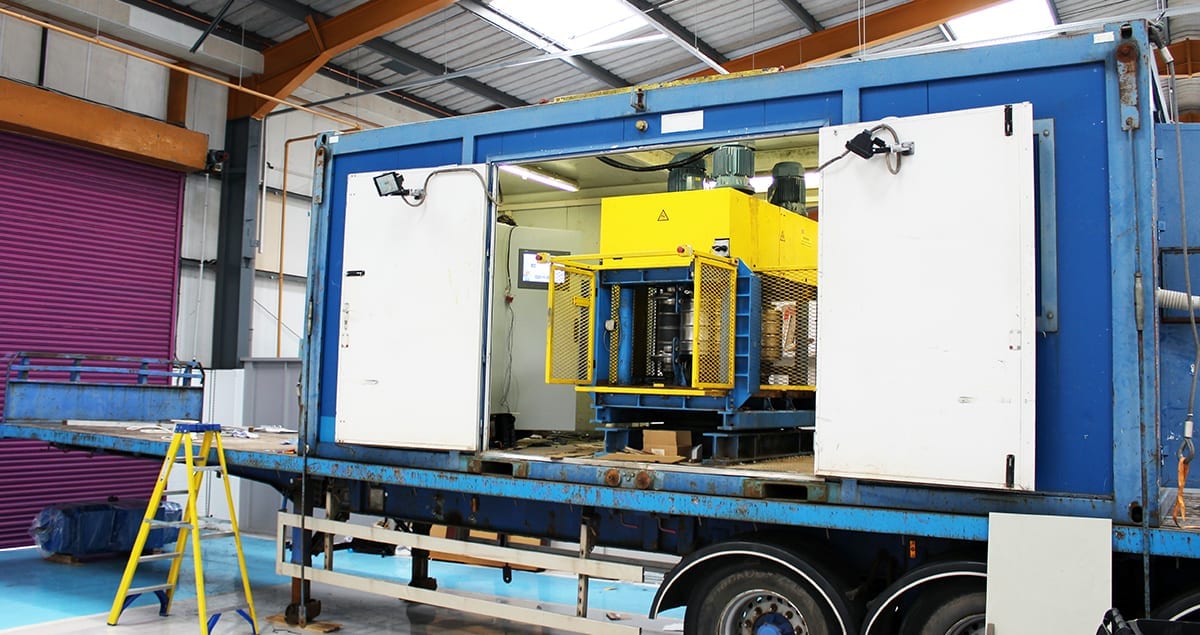 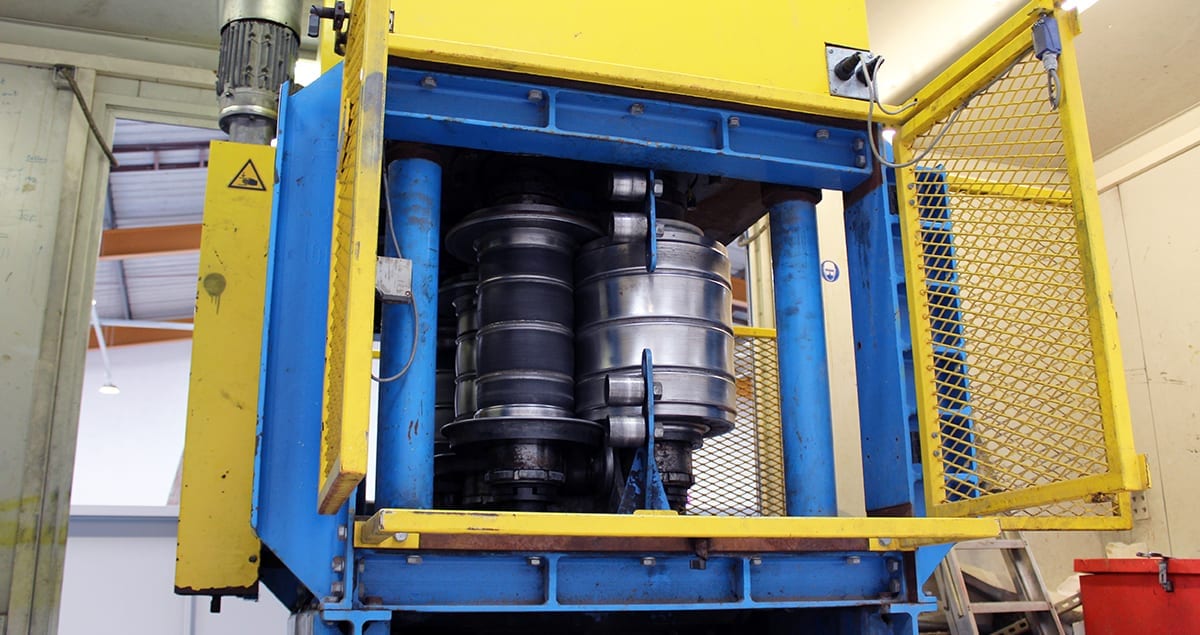 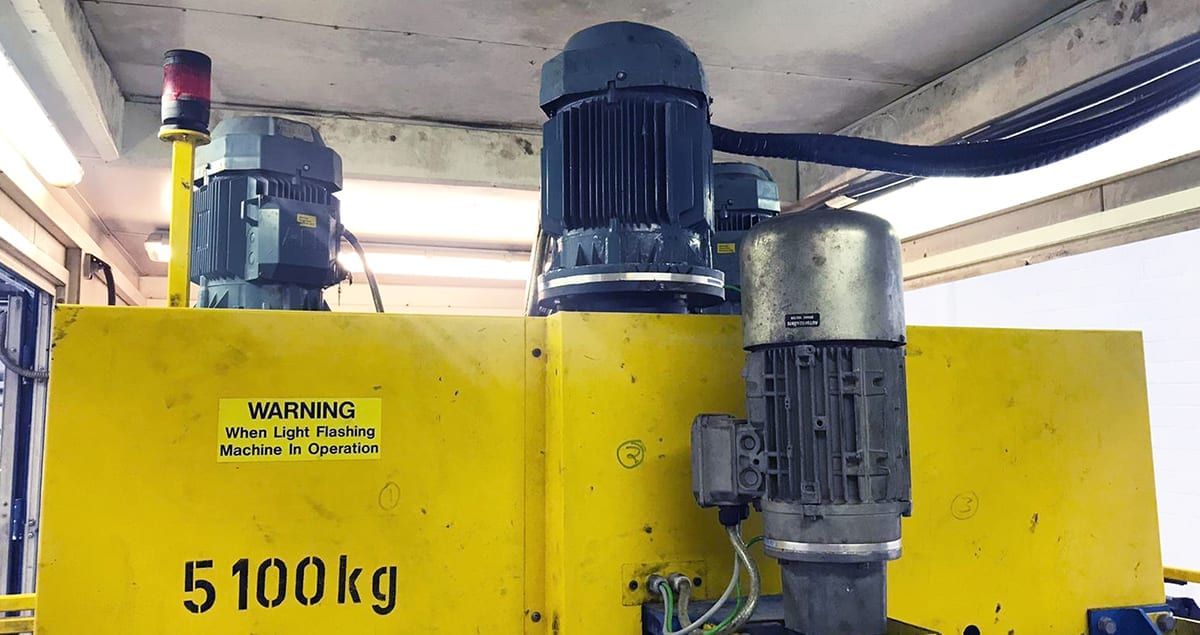 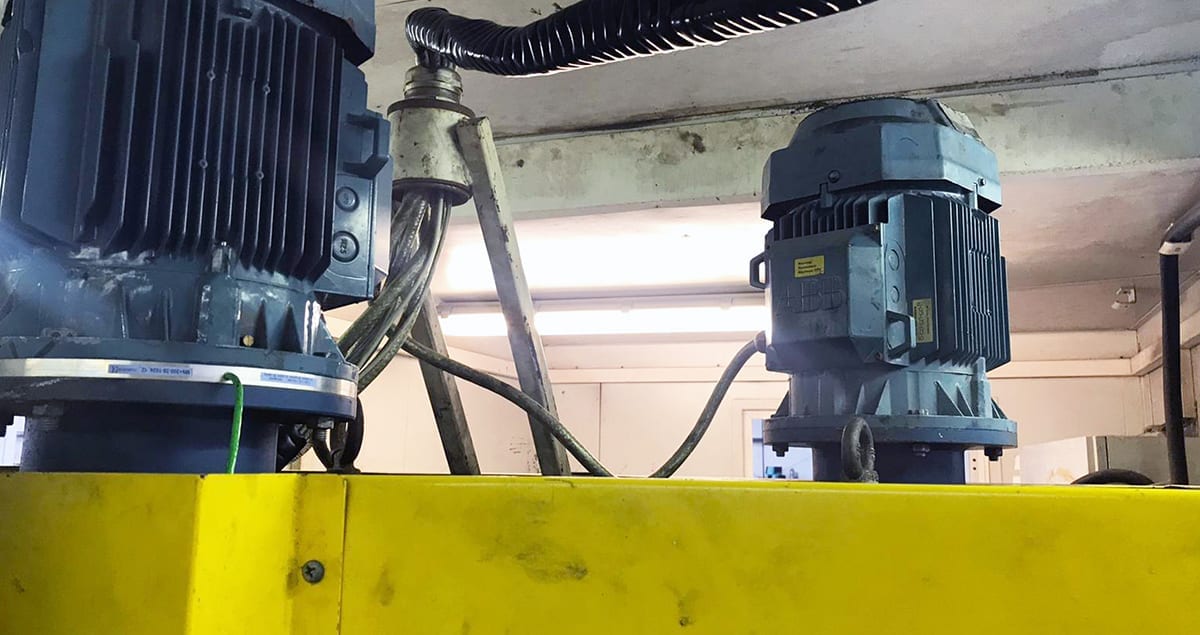 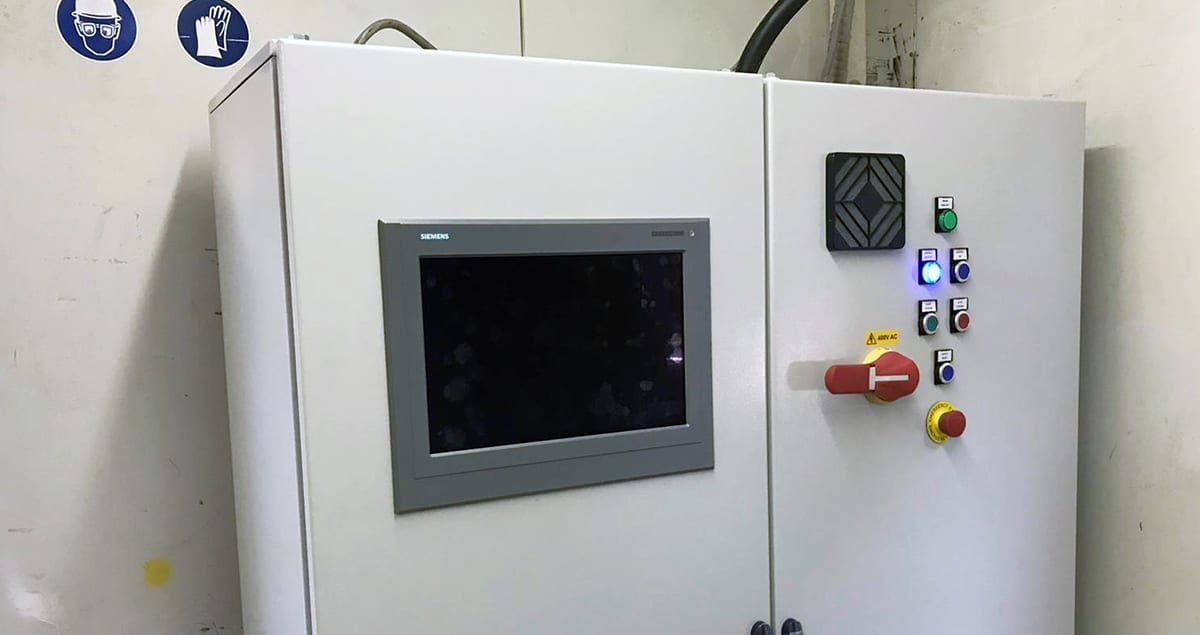 The finished product. This is the metal curver machine with the new control unit fitted and tested.

Initially, the project was to begin in 2019 but was delayed. In June 2020, Dan overtook the project and in seven weeks successfully delivered it to the customer. For two of those weeks, the machine was in the Kontroltek workshop for installation.

Dan then spent some time on-site with the customer for commissioning. This involved testing, by feeding metal through and checking different profiles. Certain things were carried out like tweaking the speed of the rollers that the metal sheets go through.

The rollers presented a challenge because there are three pairs in the machine. This meant Dan having to adjust the gearbox timings and radius calibrations until the rollers were all the same speed. If they weren’t, the roof would be misshapen and unusable.

Within a week of being commissioned, the machine was running off sheets for a project in Wales. Dan used TIA Portal 15.1 for programming and commissioning with SIMOTION SCOUT 5.6. The same as Siemens would use.

All of the work is warranted for an extended period. There’s also a two-year contract between the customer and Kontroltek, including a 24-hour response time from ourselves to connect and help if anything goes wrong.

In two years, Kontroltek will hand all HMI and PLC programming over. The customer can then deal and make edits independently with the programming if they wish. Most OEMs don’t ever hand access to programming and unfortunately, they sometimes go bust meaning customers are left with nothing.

Dan and the team were able to do more than just repair the customer’s machine. By upgrading it, we have minimised future downtime and helped prevent the need of purchasing a new machine. As well as a number of other benefits.